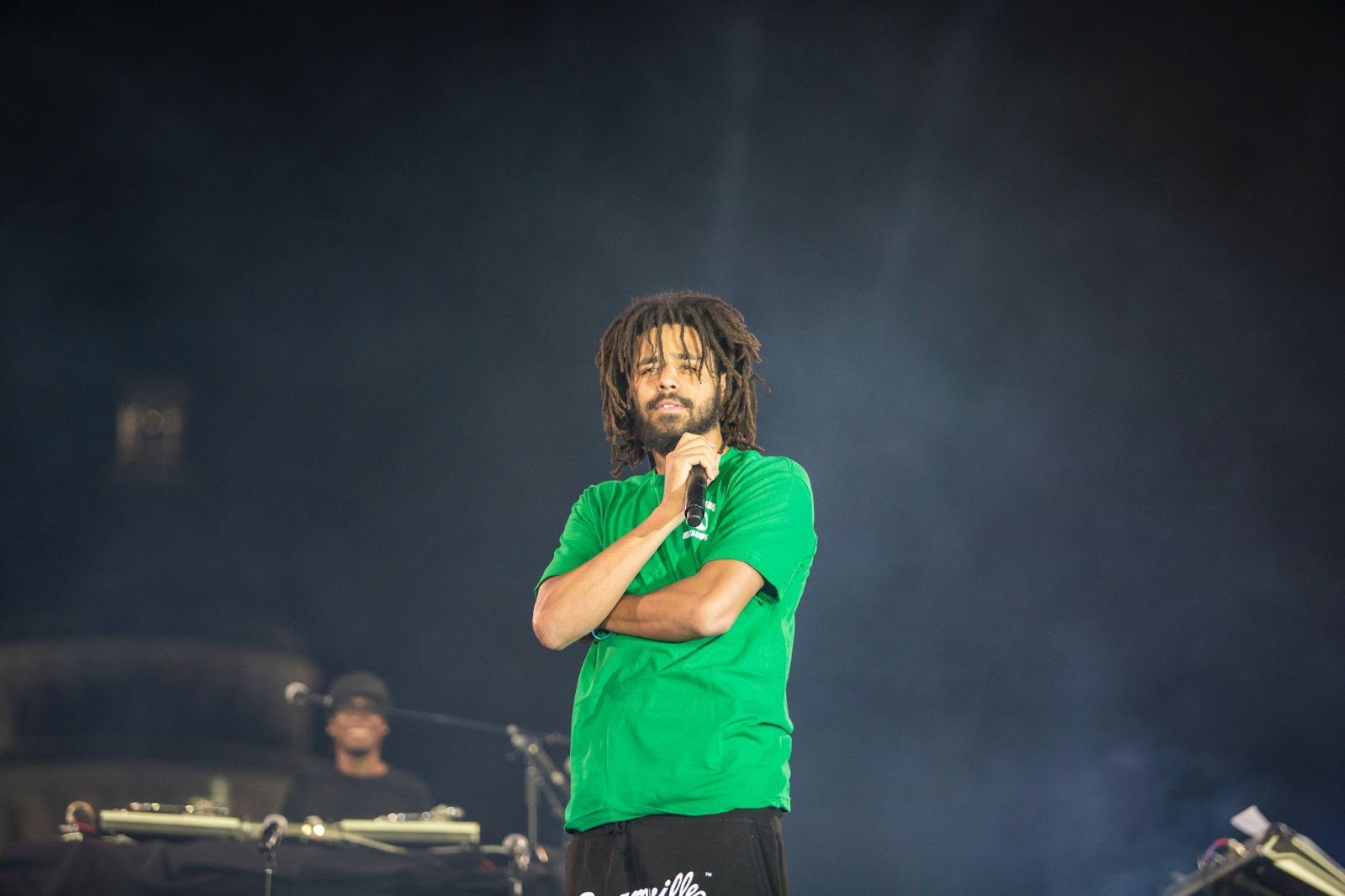 Cole rose to prominence after publishing his debut mixtape, ‘The Come Up,’ in 2007. After that, he became a superstar and amassed a sizable fortune in the last decade.

Jermaine Cole, popularly known as J. Cole was born on the 28th of January, 1985, in an Army base located in Frankfurt, West Germany.

Cole and his family were abandoned by his father when he was very young. His father was in the U.S Army.

After this incident, his mother sent him and his brother Zach to Fayetteville in North Carolina at the age of just 8.

Cole started his rapping when he was 12 years of age and by 14, rapping had already become his passion as he would fill his notebooks with music, lyrics.

But, the biggest drawback was that he didn’t have any opportunity to invest and get them recorded apart from an 808 beat machine his mother brought him so he could record and produce music himself.

By the age of 17, Cole’s music was all over the internet as he would feature them through different platforms under the moniker “Therapist”.

Cole passed out from school with a marvelous 4.2 GPA and then went on to St. John’s University in New York City for further studies where he graduated with a 3.8 GPA.

After the release of his first-ever mixtape “The Come Up”, Cole started to receive some incredible recognition from all around the world.

After the release of his debut mixtape, a very famous and popular American rapper, Jay-Z approached Cole and had a contract with him for his record label Roc Nation.

The journey took off. Cole started to settle down in the music industry and in 2009 Cole came up with his second mixtape named “The Warm Up”.

Not waiting more, Cole released another music in 2010 following his second one, “Friday Night Lights”.

In 2011, Cole produced his first-ever studio album “Cole World”, and only in that year, he tours different music concerts with Drake as a supporting act.

By the end of that year, “The Sideline Story” and his album became number one on billboard 200, US Rap, and US R&B/Hip-Hop platforms.

In 2013, after the success of his first album, he planned to release his second album “Born Sinner”.

That album too reached number one on all of the charts, as it was a marvelous hit. Similarly, in 2014, Cole released his third album” Forest Hill” and the results were no different from previous ones as this one got a hit as well and was the number one on Billboard 200, US Rap, and US R&B/Hip-Hop charts.

Both of his previous two albums “Born Sinner” and “Forest Hills” were considered platinum and this is the reason for the first time ever he got his nomination in Grammy award for Best Rap Album.

This was his 4 consecutive hit album which was number one on the Billboard 200.

Finally in 2020, on January 26th, J. Cole won his first-ever Grammy Award for Best Rap Song for the song “A Lot” with collaboration with 21 Savage.

These are the yearly earnings of J. Cole since 2014.

“Crooked Smile” (featuring TLC), “Deja Vu”, and “Neighbors” are the songs that were the most successful singles by J. Cole throughout his career.

To add more to his list of achievements, Cole has won Best Hip Hop awards several times in his career. Moreover, in 2017 and 2018, he won the Grammy award for best album.

These two achievements earned him more than thirty-six dollars million.

He has quoted that he has learned and listened to rappers like Tupac, Nas, Jay-Z, and a few more.

Cole also believed that these rappers are the best in the world and they have been influential for him throughout his career.

If you had ever pondered what J. Cole’s net worth is?

As of 2021, J. Cole’s net worth is $60 million. He has established himself as one of the most influential rappers of his generation.

With collaborations with some of the world’s biggest brands and some of the contest’s best rappers.

He truly transformed his life from poor to rich, and according to an Advanced Background Check, this man doesn’t seem to stop here as his net worth is likely to increase more than $60 million in coming years.

It’s natural for fans to want to know how much their favorite celebrities make in a year, how much money they have, and so on.

And finding out these things is very easy nowadays, as many websites keep track of the financial backgrounds of prominent celebrities and people with fame and money.

Because of increased security requirements and complicated financial rules, financial firms must now conduct a financial check on employees who work in their company or on people hired for a specific position to handle confidential information and financial assets belonging to the company and its customers.

It’s vital to know who the individual you’re employing is and what their background is.

A poor hire can cost you money as well as expose you to lawsuits and client complaints. A significant data breach can damage your reputation irreparably, resulting in financial losses for years to come.

That is why it is critical to do a Financial Background Check on all applicants and cross-check them against significant sanctions and watch lists to ensure that you choose trustworthy employees while reducing the risk of theft or other bank fraud against your company.

Although there is no one-size-fits-all answer for background checks, there are several advanced screens to explore.

The section below will go over the different actions you should take to guarantee you hire trustworthy applicants.

Standard background checks mainly verify the identity and criminal history, although the screening can differ depending on the company. It helps companies detect detecting red flags, such as significant crimes. This background check is of no use in financial institutions.

Second, regular background checks exclude credit checks because all of this is important to know when hiring someone who will be in charge of the company’s finances.

Third, necessitate industry-distinct examinations. Verifying your client’s education is an excellent initial step to ensure they have relevant experience and professional credentials or licenses you possess are current and legitimate.

A civil court check is done when a person is to be hired in a financial firm. It checks record crimes brought before a court by the putative victim or harmed party. When employing individuals in financial institutions, it is a crucial step to look into their criminal background.

A credit check is an important aspect of the recruiting process in the financial services industry. It reduces the danger of theft, embezzlement, and fraud while also ensuring that you choose someone who has a track record of making solid economic choices.

Late or missed payments, foreclosures, bankruptcies, and collection accounts can all be revealed by a credit check.

If you decide to conduct a credit check, take extra care to ensure that you are by the law. In positions where credit history does not influence the job, a credit check is deemed offensive.

4. Verification of Education, Employment, and Credentials

Financial services jobs may demand credentials, licenses, and degrees. As a result, it’s critical to verify that an applicant has every above thing legitimate.

These all verification checks can be added to a regular background check, commonly required in the financial services industry.

When hiring someone for a high-level post in financial services, an employer can require a variety of advanced examinations. There is no such thing as a one-size-fits-all solution in this situation.

Some of the other background checks options available are:

A more comprehensive background check process is generally required because high-level occupations and financial organizations need access to sensitive information. Additional checks may take a bit longer than usual, but they are well worth it to defend your company’s credibility.

Wealthiest Beggars In The World

Chetak Lottery Results || Things To Keep In Mind In 2021