Tony Robbins is a successful entrepreneur, a best-selling author, an actor, a philanthropist, and also a life coach, or you may say, a motivational speaker.

Known for his knowledge-packed seminars, infomercials, and self-help books, Robbins is known as the world’s number 1 businessman and life strategist. In this article, we give you interesting information about Tony Robbins Biography.

Tony Robbins was born in North Hollywood, California, as Anthony J. Mahavoric on February 29th, 1960, and when Robbins was seven, his parents separated. After separation, Robbins’ mother remarried a baseball player who adopted Anthony legally when he was 12.

Being eldest of the three children, Robbins worked as a handyman to provide his siblings, the basics.
He calls his life at home as chaotic and abusive. In high school, his height grew by 10 inches. This growth spurt became the reason which makes him suffer pituitary tumour. He left his home when he was seventeen and never looked back. He did not attend college and worked as a watchman.

The Career Of The Best-Selling Author

Robbins began his career as a seminar promoter for the author and motivational speaker named Jim Rohn when he was 17. He became the partner of John Grinder, co-founder of Neurolinguistic Programming in the 1980s.

This year was the time when Robbins only taught NLP and Ericksonian Hypnosis, and after that, in 1983, he learned about firewalk and that he merged that in his seminars.
The first infomercial of Robbins released in 1988, produced by Guthy Renker. The infomercial helped him to promote his services as a peak performance coach. He sold his power self-help audiotapes, which given exposure by his infomercial.

His infomercials were gone so famous that by 1991 an estimate of 100 million Americans and 200 of the media markets saw those. 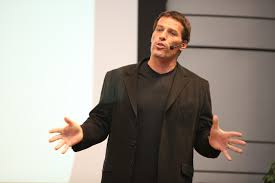 By the time of his popularity, Robbins started his leadership Academy seminar. Sponsored by Learning Annex, he is a speaker in the seminar circuit. He became so famed that 4 million people attended his live workshops. In partnership with Cloe Madanes, Robbins found an organization to help people with addiction and other issues by giving them training of life skill coaches, and the organization named after both the partners is Robbins-Madanes Center for Intervention.

Robbins also had an interest in sports and continuing that he launched Major League Soccer franchise in Los Angeles in 2014.

Now, called as Los Angeles Football Club, with the contribution of a group of investors. In 2016 he partnered with Golden State Warriors and purchased an eSports pro gaming organization named Team Liquid.
Like other famous personalities, Robbins also became the target of criticism. The criticism happened so because he criticized the Me Too Movement at a seminar held in San Jose, California, on March 15th, 2018. He called using the theme Too Movement as using a drug, significance, to feel good.

Giving an example of the story of a powerful man, he went on criticizing the use of movement, for which he apologized later on the social media app, Facebook. If you want to know about the career of Cristiano Ronaldo you must visit Cristiano Ronaldo Biography.

Teachings Of The Life Strategist

Robbins wrote many books, did many seminars, and gave several speeches in which he teaches the techniques and practices to help people improve their lives. Speaking about human needs and the power of decision making, he assists in mastering the emotions.

Discussing his seminars, Robbins has set his themes based on the self-help and positive thinking as the majors for his multiple workshops held annually. His workshops include firewalks, massages, and various physical exercises for the participation of the audience.

Cost of Robbins’ seminars, with so much positivity, varies from $2500(for Unleash the power within program) to $5000 (for Date with Destiny seminar).

His teachings about health and energy, given in his chapter called Unlimited Power, in his book Energy; The Fuel of Excellence is a gem. The book supports Harvey and Marlin Diamond’s Fit for Life program. That talks about the food and deep breathing for real life.

Working As A Philanthropist

In 2016, This foundation, partnered with Robert Carr, who donated $1 million in an event. Which helped 100 low-income students to join medical schools. The Charity Navigator gives 4/4 stars to Robbins’ foundation.

Another charity program of which Robbins is a part, the Feeding America. For Robbins, it all started when in 2014. Robbins donated all of the profit he gained from his book and added personal donations to it and fed 100 million needy people from 2014-2015.

In 2016 he again announced his meal donation to 100 million people, which once again seen in 2017 also which fed 101.6 meals to older people, families, and children.
Seeing the shortage of clean water in rural eastern India, Robbins partnered with the Spring Health organization, which provides fresh, clean water to prevent waterborne diseases in the small villages.

As An Actor And A Social Personality

Robbins using his acting skills played cameo roles in the films named The Cable Guy, Show Hal, and Reality Bites. He also appeared in a show called The Roseanne Show.

He also debuted a reality show in partnership with NBC, in July 2010, called Breakthrough with Tony Robbins. And spreading the positive vibes and helping the participants of the show to face their hardships of life.

The low viewership became the cause of the cancellation of the show. After the failure of the show, it again came up as 2012 season, aired by OWN Network. This time it became hit, and Robbins also started cohosting Oprah’s Lifeclass on the same network.

On July 15th, 2016, Netflix released a documentary about Robbins, translated into 190 languages, called Tony Robbins: I Am Not Your Guru. It premiered in March 2016, in the South by Southwest film festival.

The net worth of Tony Robbins estimated to be $500 million. He started with empty pockets and has built an empire making people admire his success story.

Robbins married Rebecca Jenkins in 1984, after meeting her in a seminar. Already a mother of 2 children whom Robbins adopted, got divorced in 1998. In the same year of his marriage, in 1984, Robbins had a son from his girlfriend, Lis Acosta.

His son, named Jairek Robbins, followed his father’s footsteps and is also a personal empowerment trainer. Robbins married Bonnie “Sage” Robbins in 2001 and now lives in a state of Florida named Manalapan.

What Do Seahorses Eat - Mind Blowing Facts About Seahorses

How To Clean White Vans